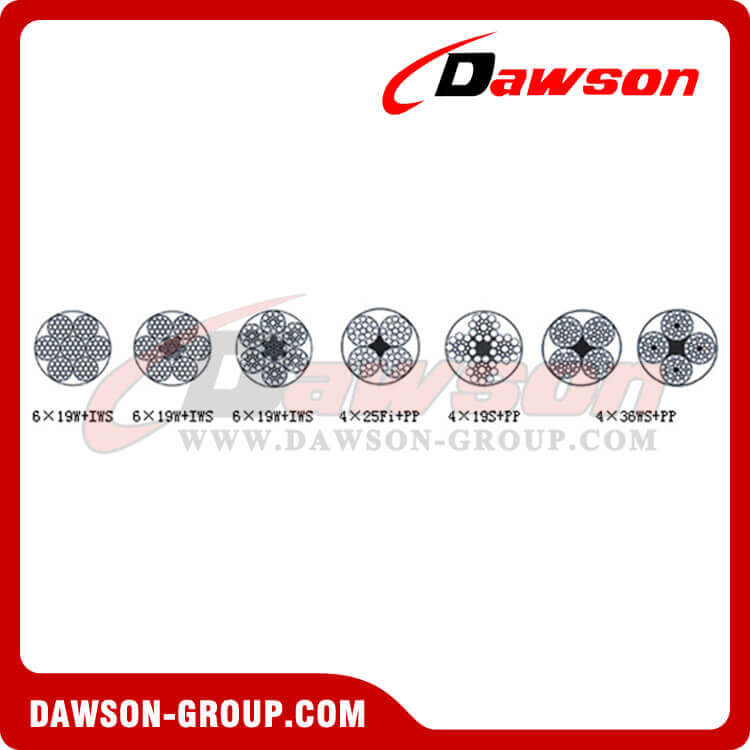 Wire Rope Sling Application
Hitches
1. Vertical- The Vertical, or straight, attachment is simply using a sling to connect a lifting hook or other device to a load. Full rated load of the sling may be used, but never exceeded. A tagline should be used on such a lift to prevent rotation, which can damage the sling. A wire rope sling with a hand-tucked splice can unlay and fail if the sling is allowed to rotate.
2. Choker- Choker Hitch configurations reduce the rated capacity of a sling by 20 to 25 percent. If a load is hanging free, the normal choke angle is approximately 135&deg;. When the choke angle is less than 120&deg;, an adjustment in the choker rated capacity must be made(see illustration below). Extreme care should be taken to determine the choke angel as accurately as possible. As indicated in the table below, the decrease in rated capacity is dramatic. 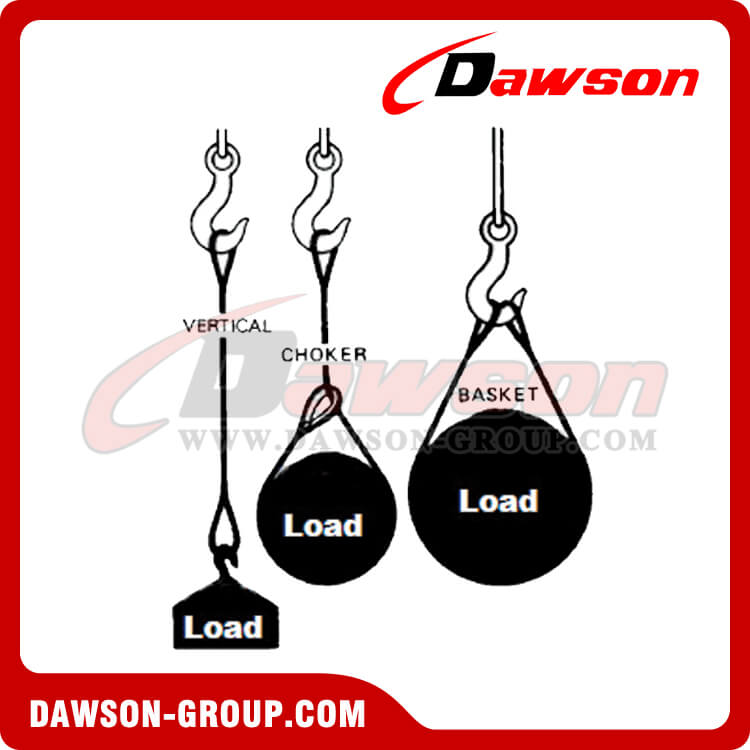 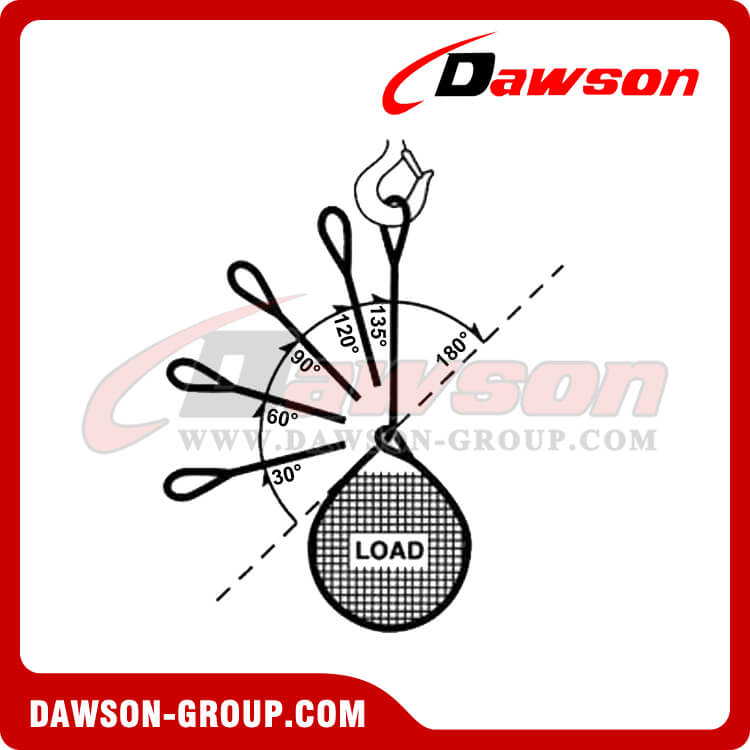 Angle Adjustment
Rated capacity adjustment for slings in choker hitch when angle is less than 120&deg;. Choke angles greater than 135&deg;are unstable and should not be used. 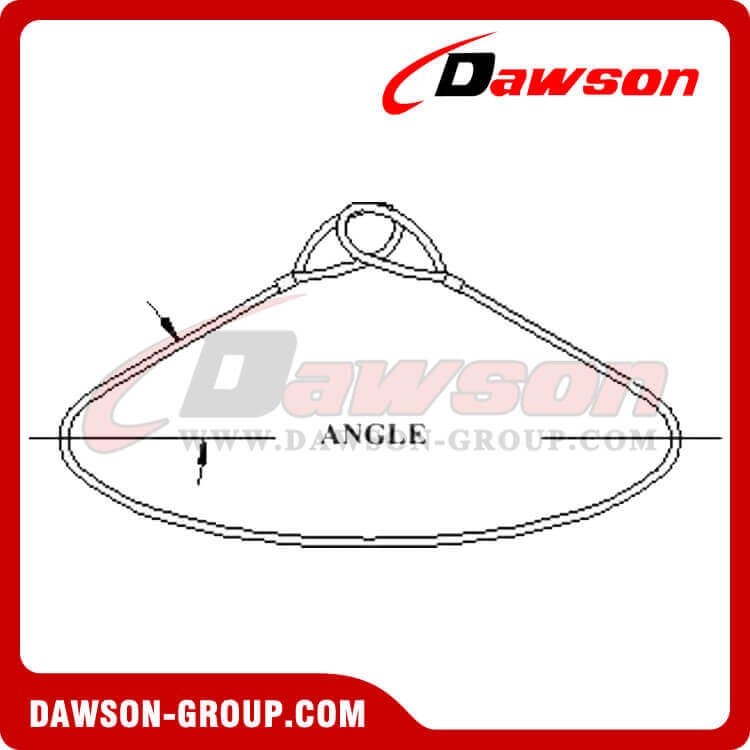 Angle
A basket hitch has twice the capacity of a sling leg only if legs of sling are vertical, and only if D/d ratio is 25:1 and it is vertical. D/d>25:1 per ANSI B30.9.
WARNING: Do not use, or allow the use of the products in this catalogue, unless the user has read and understands the applicable instructions and product warnings. Information available upon request.
Reeving
Revving through connections to load increases load on connections fitting by as much as twice.
Do not reeve. 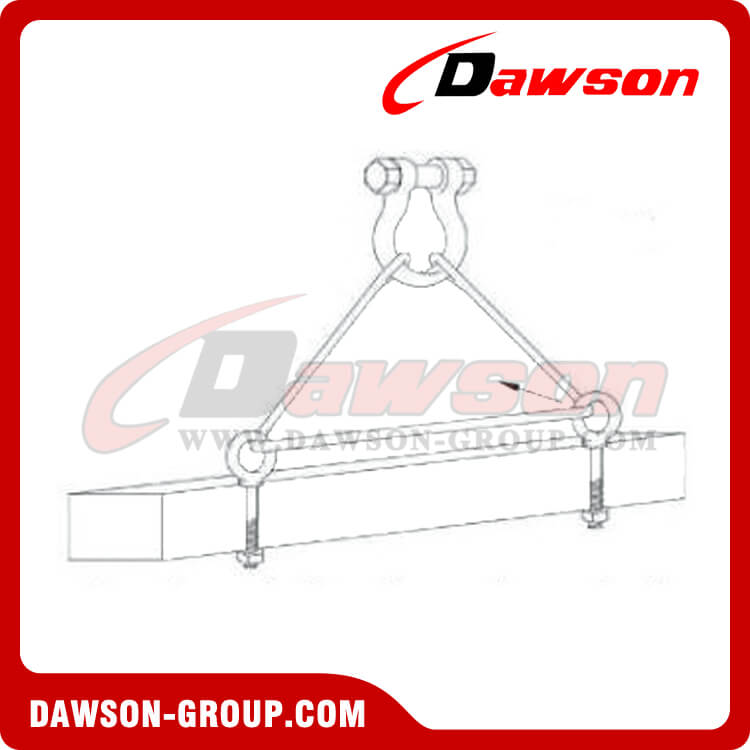 Triple and Quad Leg Slings
Triple leg slings have 50% more capacity than double leg only if the center of gravity is in center of connection points and the legs are adjusted properly(equal share of the load)
Quad leg slings offer improved stability but do not provide increased lifting capacity. 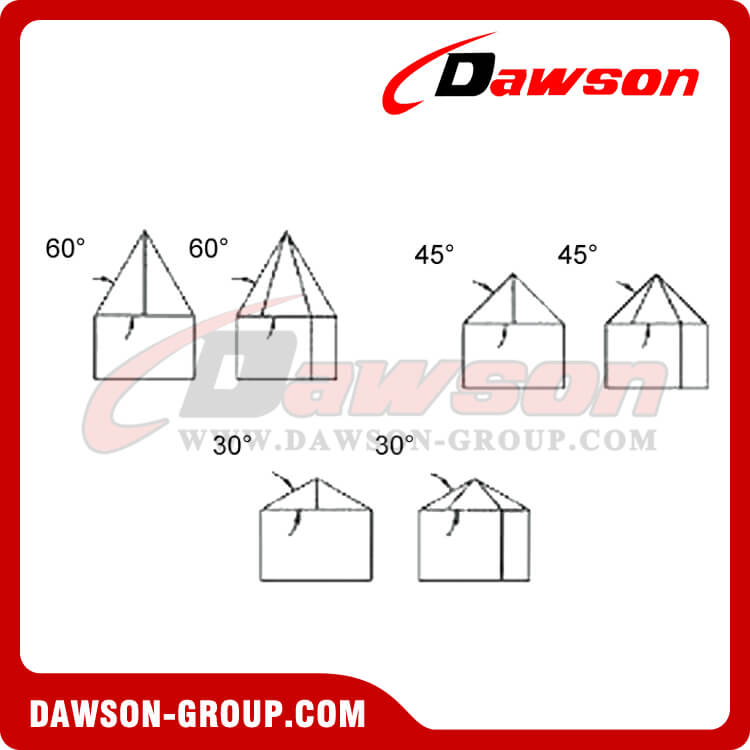 Center of Gravity(COG)
The location of the center of gravity to the pick points is an important consideration. 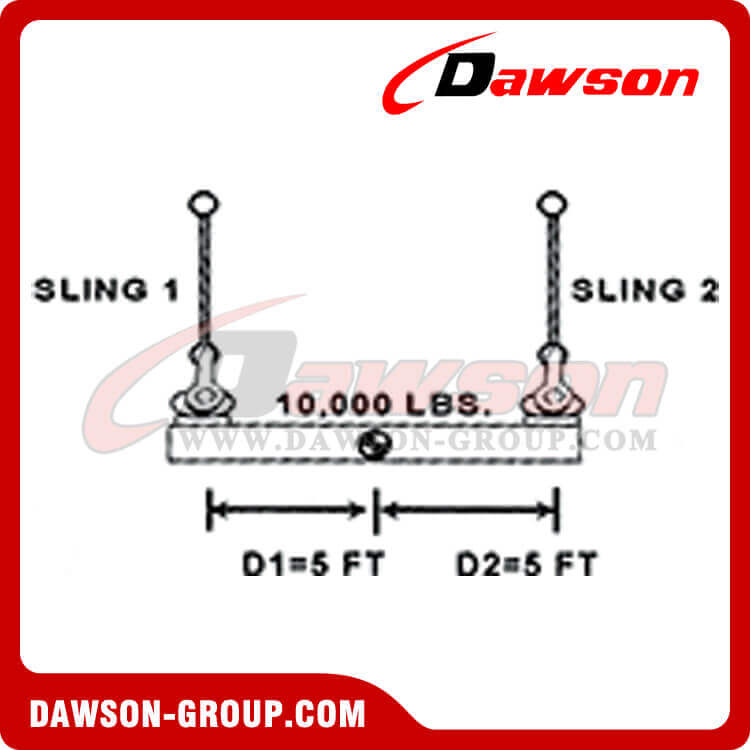 COG and Sling Loading
When lifting vertically, the load will be shared equally if the center of gravity is spaced equally between the pick points, as in the first illustration at right. If the weight of the load is 10,000 lbs., then each sling will have a load of 5,000 lbs. and each shackle and eyebolt will also have a load of 5,000 lbs.
When the center of gravity is not equally spaced between the pick points, as in the second illustration, the slings and fittings will not carry an equal share of the load. The sling connected to the pick point closest to the center of gravity will carry the greatest share of the load. Sling 2 is closest to COG. It will have the greatest share of load.
Sling 2 = 10,000 &times; 8 /（8+2）= 8,000
Sling 1 = 10,000 &times; 2 /（8+2）= 2,000 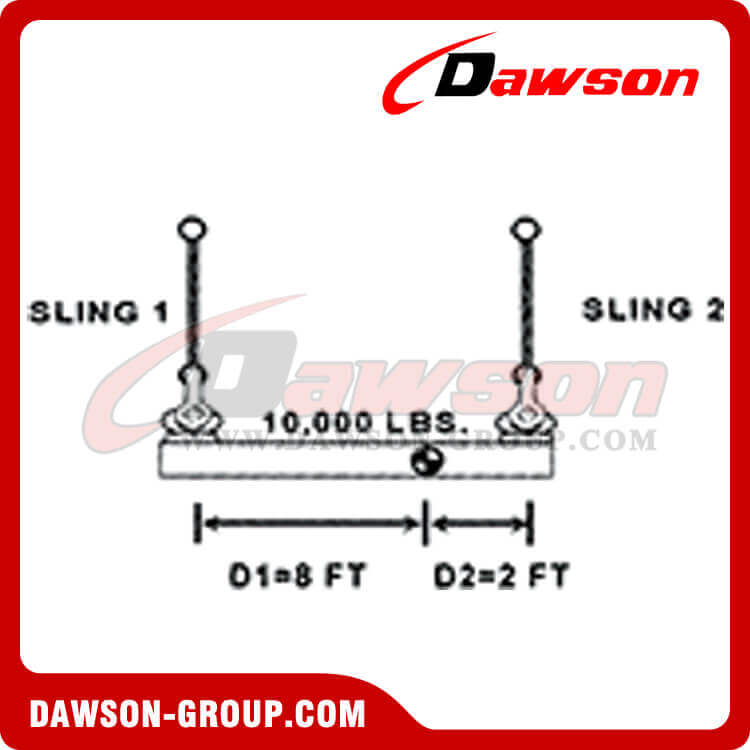 WARNING: Do not use, or allow the use of the products in the catalogue, unless the user has read and understands the applicable instructions and product warnings. Information available upon request.
Sling Angle
Sling angle (also called angle of loading) is the angle measured between a horizontal plane and the sling leg or body. This angle is very important and can have a dramatic effect on the rated capacity of the sling (see illustration below) . As illustrated at right, when this angle decreases, the load on each leg increases. This principle applies whether one sling is used to pull at an angle, in a basket hitch, or for multilegged bridge slings. Sling angles of less than 30&deg; shall not be used. 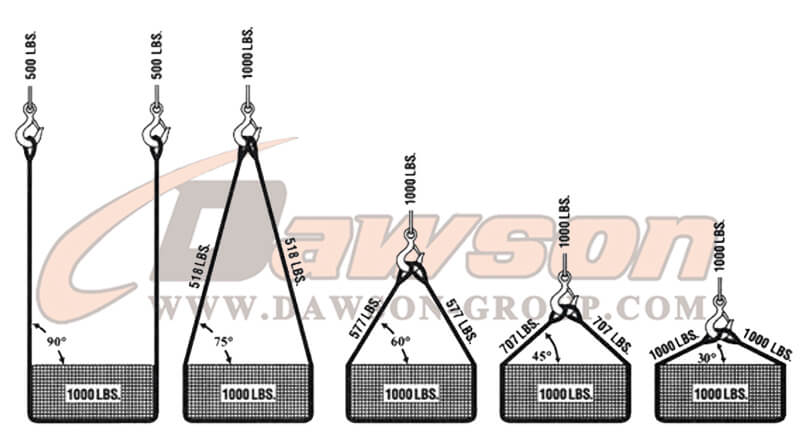 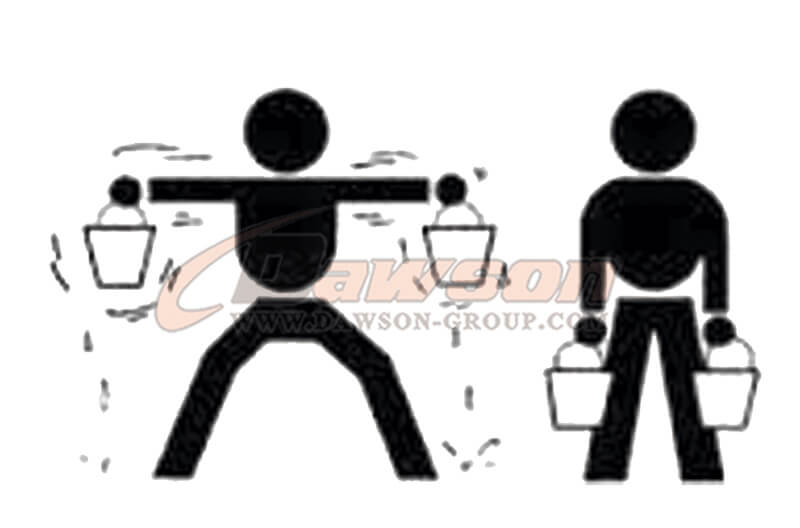 Angles and Stress
How do you carry two buckets of water? These illustrations typify the stresses imposed on slings when the legs are attached to the load at various angles. 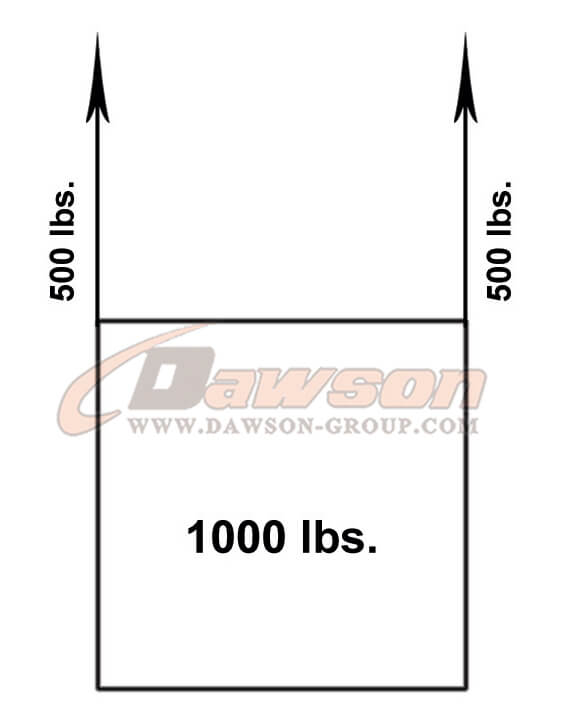 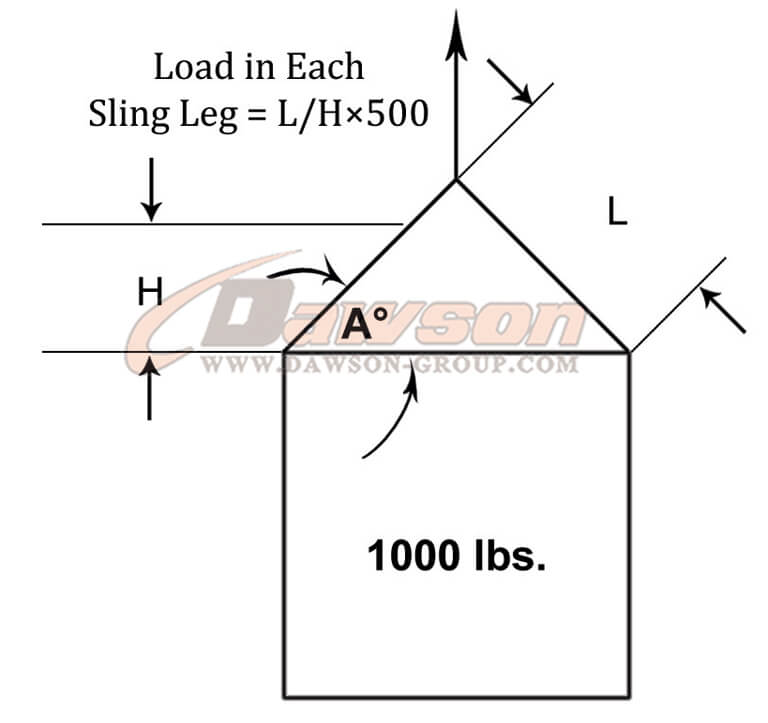 WARNING: Do not use, or allow the use of the products in the catalogue, unless the user has read and understands the applicable instructions and product warnings. Information available upon request.
Other related products: 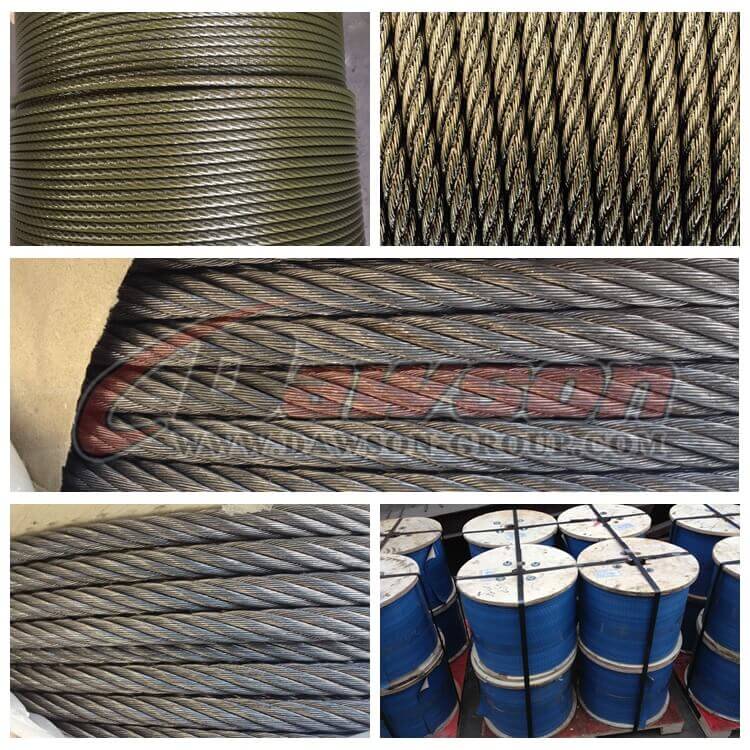 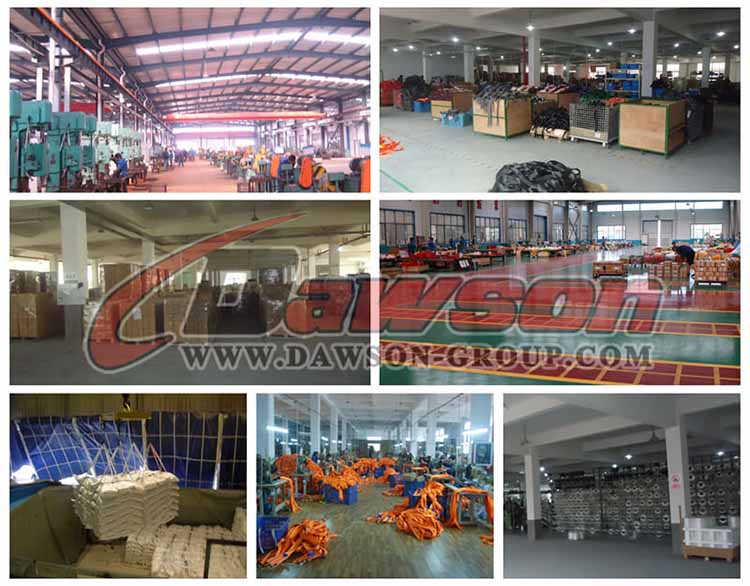 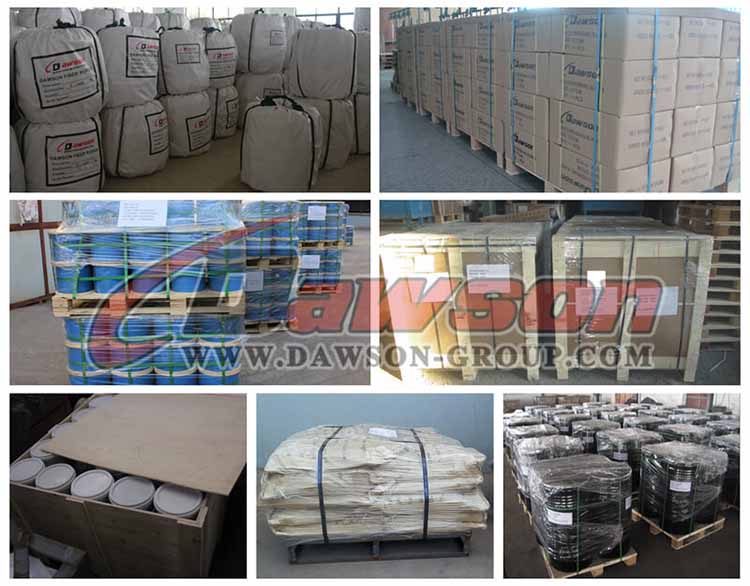 >If you have any suggestions or opinions about our products, please leave a message, and we will immediately answer your questions. Thanks for your support.