Dawson Marine Salvage airbag is the best choice for 100-2000 tons buoyancy need. Its good characters of easy transportation and store, little demand of maintenance make the salvage works more flexible and cost-effective. Not only act as buoyancy bags, Dawson salvage bags are versatile, they can jack up stranded vessels and roll them back into water. In tsunami disasters salvage works, those bags played a important role.

Marine salvage works are always complex, they need combination of many equipments to achieve success. Salvage marine airbags can be used to offer buoyancy to make up the shortage of lifting capacity from barge crane. Salvage airbags can be attached to shipboard or stuff into cabins to offer buoyancy assistance. People should control the lifting speed to allow airbags have enough time to vent expanding air by over-pressure valves. Generally the lifting speed is controlled at 1 meter per minute. 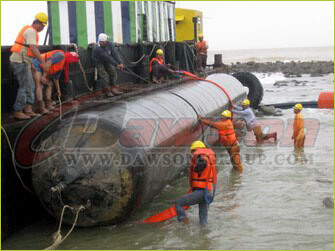 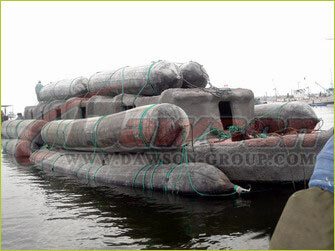 The design of salvage airbag binding method varies for different projects. Also it is very important for the success of salvage. The length and material of binding belts should be decided by calculation. Rubber belts are often used to bind salvage airbags together and nylon ropes are found to be good to fix airbags to objects. Knitted net with good selected nylon ropes is preferred when people want to assemble airbags to refloat objects. 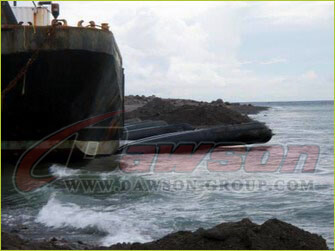 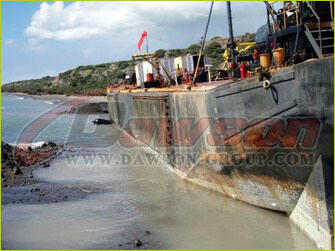 Salvage marine airbags can be inserted between vessel bottom and seabed to lift sunk vessel which can partly restore buoyancy of vessel itself. Each salvage marine airbag can lift more than 200 tons heavy under the water. For stranded vessel salvage this heavy lift function is extremely useful.To send a stranded ships back to water marine airbag is the most convenient tool. People can insert airbags to the bottom of vessel and then inflate them. With the pull of a tugboat or push of a bulldozer, ship can easily move into water with the roll of airbags.

Using buoyancy of salvage airbags, launching ship or structure wit insufficient water level becomes to be possible. In some caisson launch projects salvage airbags have been proved to be very helpful. Without buoyancy tanks or bags, if water level  is not enough for launch, people have to build caisson for the second time after the bases are launched. Dawson Marine had successfully assisted  5000 tons lightweight vessels and 8000 tons caissons' launch with salvage bags in low water season. 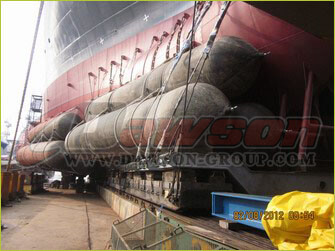